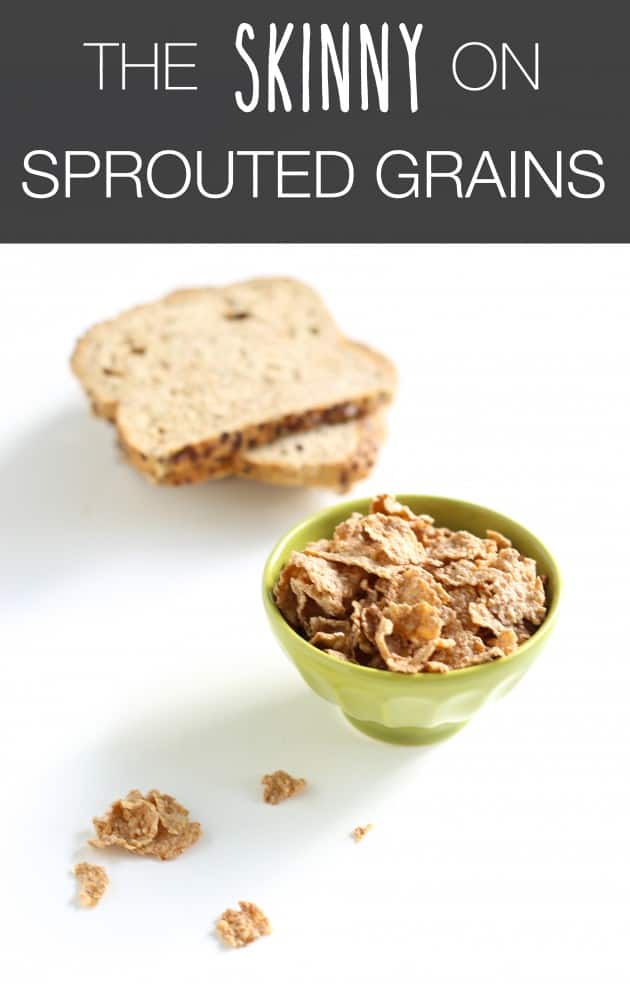 Sprouted grains seem to be popping up everywhere these days. Literally–and for good reason because a growing body of research suggests sprouted grains may have a little more to offer nutrition-wise than their unsprouted counterparts. Here’s the skinny on these special grains, and a few of my favorite ways to enjoy them:

What are sprouted grains?

Simply put, sprouted grains are seeds from cereal grasses (think whole grains like wheat, oats, barley, spelt and brown rice) that have begun to develop into new plants. When temperature and moisture levels are just right, whole grains can actually be coaxed to germinating. Cool huh? When this happens, the whole grain’s starchy endosperm and nutrient-rich bran nourish the plant’s growing embryo, also known as the germ, while the husk adds a layer of protection at the beginning stages of sprouting.

After the grains have sprouted, they’re either dried and stored until they are cooked or milled or they’re pureed and used to make baked goods like bread, english muffins or tortillas and are usually sold frozen.

How are they different than unsprouted grains?

In the process of sprouting, certain nutrients increase, others decrease, and enzymes stored inside the whole grain are released. As a result, sprouted grains are typically little bit higher in protein, sugar, fiber and certain vitamins and minerals, and slightly lower in starch which is turned into energy to fuel growth. Additionally, the amino acid composition (the building blocks of proteins) changes as well.

As for formally differentiating the two, there is no official definition for “sprouted grain” but if you’re interested you can read more about industry standards here.

What are the nutritional benefits of sprouted grains?

The sprouting process increases the amount and bioavailability–the amount of a certain nutrient our bodies can absorb–of certain nutrients like iron, vitamin C, the B vitamins like folate, fiber and essential amino acids typically lacking in grains, like lysine. Since sprouted grains also tend to be slightly lower in starch they might also be a bit easier on the tummy.

The nutritional content of sprouted grains is influenced by the seed type, quality, sprouting conditions and processing. Though the nutrient changes are subtle, sprouted grains offer all of the same–if not more–benefits of traditional whole grains including dietary fiber, B vitamins, iron, magnesium and selenium, important nutrients that are missing from white or refined grains.

How can add sprouted grains to my diet?

Sprouted grains, and products that contain them, are showing up more and more on supermarket shelves. Keep your eyes peeled in the bread aisle, freezer section and the cereal aisle too.

I’ve tried a few different types of sprouted grain breads and tortillas, as well as a new cereal from Kashi called Organic Promise Sprouted Grains which is made with a blend of several sprouted wheat, oats, barley, spelt and brown rice. Yum! They sent me some to taste test and I’ve been loving it (and the 6 grams of protein and fiber, and only 9 grams of sugar it packs in a serving) with a little milk in the morning, or sprinkled into yogurt with some fresh fruit for a midafternoon snack. It’s not out yet (sorry to be a tease!) but will be available at grocery stores including Whole Foods, Costco and Kroger starting in April.

Another delicious way to incorporate sprouted grains into your diet is by sprouting your own! I haven’t gotten around to trying it myself but hear it’s pretty simple and safe when done correctly. I found this great guide to sprouting if you want to give it a try!

Are you a fan of sprouted grains? Ever tried sprouting your own?

A special thanks to Kashi for sponsoring this special sprouted grains post.