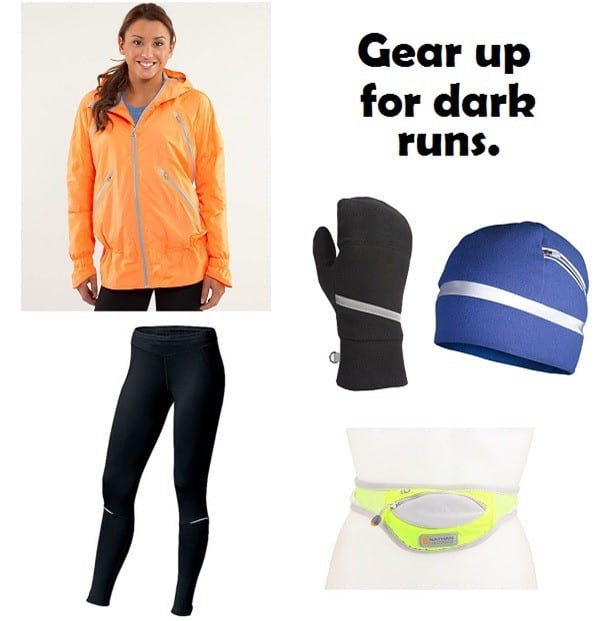 I’m sure you evening runners are dreading turning the clocks back this weekend but I’m an early exerciser and the anticipation is killing me. We’ll continue to lose daylight hours for another 7 weeks now though, so the 6am glimmer of daylight I’ll have as of Sunday morning will surely be short-lived.

I’ve done a fair bit of running in the dark over the years. Sometimes, it’s necessary. It’s not particularly fun and actually can be quite dangerous if you’re not prepared. I learned this the hard way.

I once had a crazy ass dog come after me in the wee hours of the morning. Granted this could have happened at any time of day but with not a soul around, I envisioned being dragged off and mauled. I had my phone in hand but no real plan of who I‘d call for help if this dog ever attacked me. Luckily, this angry little monster backed off when I kicked it in the mouth (which I still feel badly about) – but that’s when I realized being prepared is absolutely necessary.

With our clocks turning back this weekend & the darkest day of the year approaching, I thought these tips for running in the dark would be helpful for you new runners & a good reminder for some of you dark road-running veterans:

2. Bring a buddy. It sounds cliché but there’s definitely safety in numbers.

3. Tell someone your agenda. If you’re running alone and no one is home when you head out the door, send a quick email or text to a friend or family member letting them know:

4. Switch up your routes. Don’t run the same route at the same time on the same days. There are creepy people out there who will take notice.  Also, stay out of the sketchy areas, people! Creepers love dark, sketchy areas.

5. Bring your phone. If you run into trouble, help is just a call away.

6. Be ready to speed dial & don’t call your friends/family. Know what buttons to press to make an emergency call or program 911 into your phone. They’ll always answer but your friends and family may not.

7. Wear ID. God forbid an accident happens, a simple ID bracelet or license can provide police, EMTs & hospital workers with invaluable information. It will save time tracking down family members and enable medical personnel to urgently access electronic medical records if needed. Include allergies or medical conditions and you’re even more ahead of the game.

8. Run against traffic. You certainly won’t miss a set of glaring headlights but tired eyeballs (especially early in the morning or late at night) might not spot you in your fancy reflective gear. Running against traffic puts the runner in control of getting out of the way if a car comes dangerously close. Don’t depend on drivers to avoid you.

9. Embrace silence. Forget hearing cars, you’ll never be able to hear someone or something (like a rabid dog) coming up behind you if you’re bopping down the road to “Call Me Maybe.” Take advantage of your heightened hearing ability in the dark, that’s what it’s for!

10. Stick to the pavement. Seems obvious but trails are a lot darker than you’d think. They stay darker later in the morning and get darker earlier in the day than streets. You’ll also never find street lights on trails, which also will help keep you safe!

Question of the day: How do you stay safe on dark runs?

P.S. Other running-related healthy life with style posts: drinking while training for a race, potential benefits of  ice water before hot workouts, tips on becoming a morning exerciser (including running!)