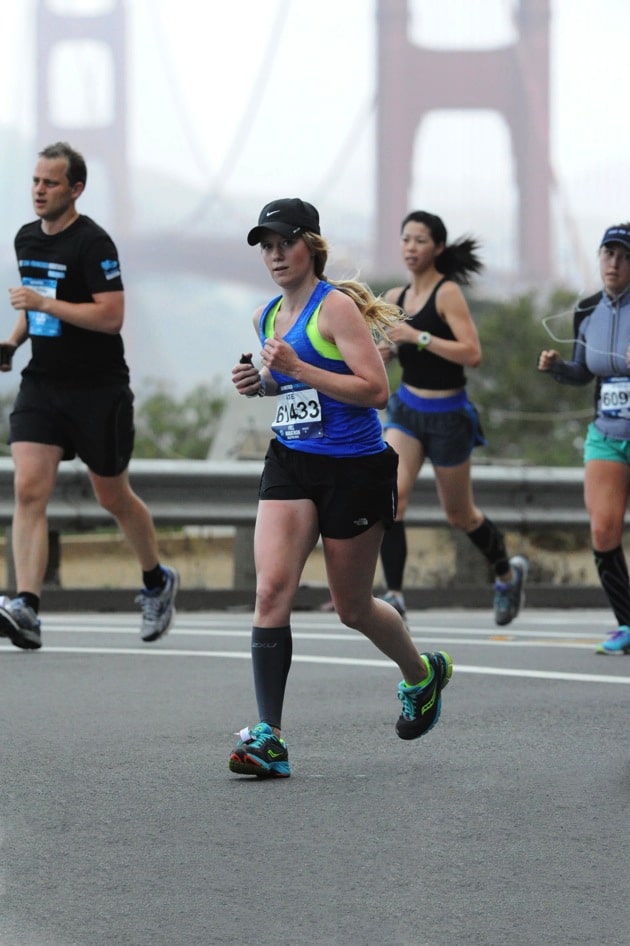 It’s not every day you get to check something off your bucket list. Entire years have passed without crossing anything off of mine––but after nearly 120 days of training, 15 long runs totaling 199 miles and dozens upon dozens of carbohydrate-heavy meals later, I can officially say I’ve checked running a full marathon off of my bucket list!

I know this recap is long overdue, so let’s get right to it, shall we?

If you’ve ever known a marathoner, or have run one yourself, you know a marathon rarely happens without at least a little bit of pre-race drama. Well, about 30 minutes after posting my 3-day countdown post last Thursday afternoon, I pulled my right calf on an easy shake-out run.

It happened so fast at first I pretended it didn’t happen at all. With a quarter-mile to go I hobbled home, stretched, foam rolled and tried not to think about it. That actually worked pretty well until I stood up to get out of bed on Friday morning.

I spent the rest of Friday in a silent panic which ended in a mini-meltdown later that night. All I could think was, “After all that training…”

Thankfully, 24 hours of rest, ice, compression and elevation had me feeling a bit better on Saturday. Not perfect by any means but good enough to give it a shot.

Miles 1-4: I’ll be honest––I spent the first mile waiting my calf to give out completely. Thankfully that didn’t happen, and eventually my focus redirected from my right leg to the beautiful views and the excitement around me. By Mile 4 I had settled in to my run. Things were looking up.

Mile 5: No really, things were literally looking up. Mile 5 marked the start of the massive uphill to the Golden Gate Bridge… And unfortunately, my calf made sure I felt every step. Despite the discomfort, I pressed on and remained focused on just making it to the top.  For a few minutes I thought it might be the beginning of the end but, as soon as I made it to the top and the hills leveled out a bit, I suddenly didn’t feel anything anymore. Not a twinge. Nothing.

By some small miracle, my calf never bothered me again for the rest of the race. WOOT!

Miles 6-17: This part of the course brought me across the Golden Gate Bridge (and back), through Park Presidio, the Richmond and then through the winding paths of Golden Gate Park. Holy rolling hills, but much to my surprise, I felt strong! The hubs greeted me in the park at Mile 15 with a big smile and encouraging words. He followed me by bike from that point on, snapping photos and cheering me along every few miles for the rest of the race.

Miles 18-22: Mile 18 is where things started to get tough. I tried to enjoy the long downhill from Golden Gate Park into Haight Ashbury but by that time my quads were shot, the sun was out in full force and I could feel my body temp inching up slowly. The rolling hills continued and the water stations seemed sparse, neither of which helped my dropping energy levels.

So, when things started getting really tough around Mile 21 I did what any girl would do––I texted my girlfriends who were tracking me along the way. Their replies:

Just think about how great your bum is going to look after this race thanks to all those hills.    ––Libby

Start deciding what you want for brunch. ––Anne

You’ve made it through the hardest part (the middle miles) too! … Also, keep planning your cartwheel across the finish line. :) Go girl!!!!!!! ––Lauren

And thanks to those girls, I trudged on.

Miles 22-26.2: Man-oh-man. If you look at my splits, it’s obvious this is where things got rough. The sun was taking its toll, not just on me but other runners too. I counted three people down in the span of one mile and, at one point, prayed I wasn’t the next one to crash into the cement.

Mile after mile though, the hubs was there to cheer me on, the inspirational texts kept coming in and before I knew it I was stepping across the finish line!

For efficiency, I’ll just sum up the 30 seconds of emotions that ensued after crossing the finish line:

So, I spent the rest of Sunday pretty much endorphin-wasted. If you’ve never experienced this level of “runner’s high”––you must because it’s absolutely hysterical. After a long shower and an even longer nap, the boys took Erin and I out for Mex & margs to celebrate.

I’ve been living in high waisted skinny pants since Sunday because, well, they feel amazing. Kind of like a compression sock for my whole lower body. Monday was slow going and going up and down stairs was absolutely dreadful. But after a few days of rest with some light walking mixed in, I’m feeling about 90% recovered at this point. I haven’t felt up to running yet but I’m getting there and am most looking forward to adding strength workouts back into my routine!

How’d it go? Awesome. I loved it. Training was tough, but the race itself was completely amazing. I’m now more in love with running than I ever have been before.

Would I ever do it again? I promised my mom I wouldn’t… but… Well, let’s just leave it at that.