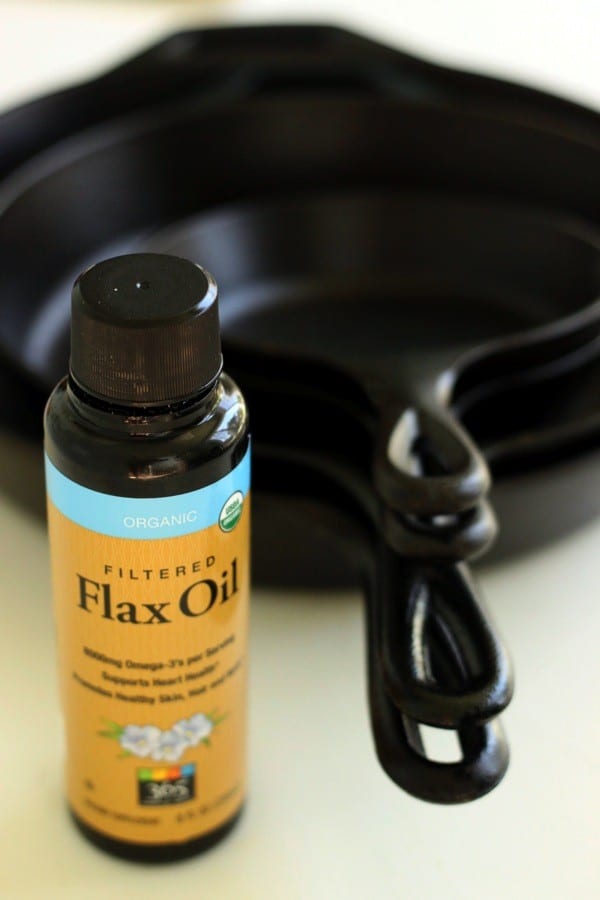 While on the train to work the other day, I overheard an older man giving a woman some tips on seasoning cast iron. My ears perked right up because at home I had not one but four new cast iron pans fresh off our wedding registry just waiting to be seasoned. According to this rather intelligent sounding gentleman, the best oil for seasoning cast iron is flaxseed because it’s food grade and, when heated above its smoke point, it polymerizes – a word I never thought I’d say again after passing organic chemistry. Polymerization is apparently what creates that durable, nonstick coating. Other oils or fats may work alright but comparatively, the nonstick seasoning doesn’t perform or hold up as well. It turns out, he was right.

Inspired by my newly acquired knowledge, I traipsed into Whole Foods to pick up a bottle of flaxseed oil over the weekend. After 20 minutes of looking in the wrong aisle of the grocery store, and pausing for a moment to get over the sticker shock once I did find it, I decided the $12 was a worthy investment. After all, cast iron is fairly inexpensive and should last a lifetime or more if well cared for. After envisioning flecks of flaxseed stuck to my pan, I went for the filtered oil but apparently unfiltered works just as well if not better. Those flecks were clearly a product of my imagination. Also, flaxseed oil is refrigerated and sold as a dietary supplement so you won’t find it next to the olive and canola oils.

I got home, cranked my oven to 475F per the chemistry professor’s advice, and brushed each pan with a light coating of oil, inside and out, making sure there were no globs or drips anywhere on the surface. Then I baked the you-know-what out of them for one hour, let them cool completely in the oven and repeated this process six times over the course of the weekend. 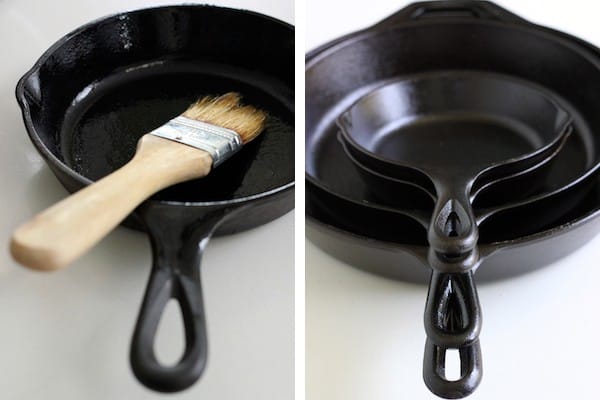 Unfortunately this process can’t be rushed and stinks up the entire house like a self-cleaning oven. I recommend doing it on a weekend you can open up all the windows, turn on a fan and do yard work or backyard DIY projects while your pans bake. It’s a labor of love and you’ll probably be tempted to stop at three or four, but go for all six coats. Your pans will have a durable matte finish at the end and should last years without much more than another coat of flaxseed oil and hour in the oven every now and then.

PS. For those of you who need a re-do, a previous article from the same cast iron connoisseur about stripping & cleaning old, rusty cast iron pans.