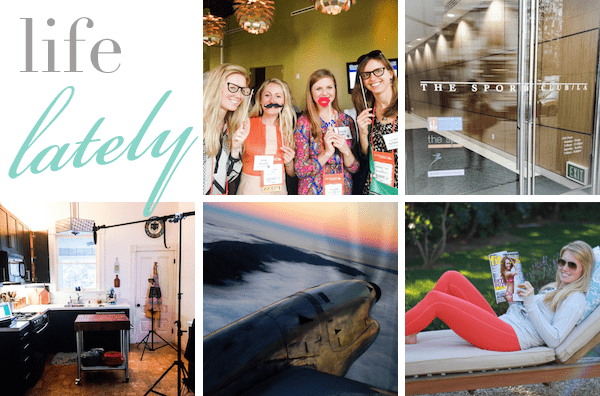 It’s been a while. Actually, it’s been so long I don’t even know where to begin! The past few weeks have been a whirlwind. So let’s catch up, shall we? Like over a mug of coffee, or a pumpkin spice latte. Just make mine a double. Wait, #PSL season isn’t over yet, is it? Have y’all moved on to Gingerbread since we last talked? Say it ain’t so.

So a few weeks back, I flew to Houston for FNCE–the annual food & nutrtition conference for us Registered Dietitians! I ate lots of samples at the expo, attended some great sessions–Top 10 Things I Learned at FNCE recap coming soon–and explored Houston a bit with Anne, Lindsay, Kristina and Kylie–in disguise of course. I also ran a 10 mile training run on the hotel treadmill, my eyes glued to HGTV and the Food Network the.entire.time. That’s what not having cable at home will do to a girl. Also, not having to run hills? Treadmills suddenly aren’t so bad now that I live in San Francisco. Strange.

Speaking of treadmills, after nearly EIGHT months without one, or any cardio equipment for that matter, I finally joined a gym a few weeks ago! I’m taking advantage of our great health benefits at work and joined The Sports Club / LA, which is just a 12 minute walk down the road from our new office space. I went to two full-body strength & conditioning classes which had me hurting realllll good. But then all hell broke loose last week and I haven’t been back since. With the Vegas Rock ‘n Roll Half Marathon just five days away, I’m trading medicine ball bootcamp for an intermediate yoga after work tonight. I can’t wait to get my ohm on.

Okay, so the reason I’ve been silent the past 10 days…

Two weeks ago we asked MyFitnessPal users to submit their favorite unhealthy holiday recipes so I could give them a makeover. I selected the winning recipes last Monday and spent all of Tuesday grocery shopping, cooking and taste-testing. My kitchen seriously looked like the fridge and cabinets exploded! With the recipes remade, Wednesday was devoted to script-writing, completing nutritional analyses of all six recipes and prepping to remake all of them over again, only this time for the camera.

At 7am last Thursday, a crew of 8 literally set up a tv studio in my kitchen–which has now become the official MyFitnessPal Test Kitchen, too.

After hair and makeup, I had about four minutes to learn how to read from a teleprompter. All while trying not to get my curls stuck in a bowl goat cheese while demonstrating how easy it is to make a healthier dip.

Let me tell you, cooking for the cameras isn’t easy. I have a newfound respect for Guy, Tyler, Ina, Julia, all of those on-camera culinary personalities.

I may even refrain from poking fun at Rachael Ray from now on. At least I’ll try.

The videos are crrently in edit mode and will be shared on MyFitnessPal and Cooking Light blogs throughout the holidays. I’ll also be sharing the recipes, links to the videos and some behind-the-scenes photos here on the blog. I can’t wait to see the final clips!

Just a few hours after the camera crew packed up and the leftovers were put away, I hopped an early Friday morning flight to join my husband and some friends for a long weekend in Santa Barbara. I was exhausted but getting on a plane after such a hectic week was utterly therapeutic. I mean the sunrise alone was worth the early wakeup call!

I literally spent the entire weekend cat-napping on the couch, reading magazines on the patio, hiking with the hubs and riding around town on a pink beach cruiser.

Beach cruisers are kind of awesome, by the way.

So tell me, what’s been going on in your life lately? How do you decompress after a crazy work week?